Checksums can be calculated automatically, but if you wish to send out wrong checksums, that is supported too. It allows you to create and send any possible packet or sequence of packets on the ethernet. Mausezahn can be used, for example, as a traffic generator to stress multicast networks, for penetration testing of firewalls and IDS, for simulating DoS attacks on networks, to find bugs in network software or appliances, for reconnaissance attacks using ping sweeps and port scans, or to test network behavior under strange circumstances.

Mausezahn gives you full control over the network interface card and allows you to send any byte stream you want even violating Ethernet rules. Mausezahn is basically a versatile packet creation tool on the command line with a simple syntax and context help. It could also be used within bash- scripts to perform combination of tests. Guest Book Hi. Trackback 0 Comment Trackback :. Tae-Ho Trackback 5 Comment 0.

Trackback 0 Comment 2. Prev 1 2 Next. Notice hi. My Link hi. Total 5,, This will case nemesis-icmp to use the specified payload-file as the payload when injecting ICMP packets. For packets injected using the raw interface where -d is not used , the maximum payload size is bytes.

For packets injected using the link layer interface where -d IS used , the maximum payload size is bytes. Specify the ICMP-injection-mode to use when injecting. Display the injected packet in human readable form. This will cause nemesis-icmp to use the specified original-IP-options-file as the options when building the original IP header for the injected ICMP unreachable, redirect or time exceeded packet. IP options can be up to 40 bytes in length. The IP options file must be created manually based upon the desired options.


Specify the destination-IP-address within the IP header. This will cause nemesis-icmp to use the specified IP-options-file as the options when building the IP header for the injected packet. Specify the source-IP-address within the IP header. Valid type of service values: 2 Minimize monetary cost 4 Maximize reliability 8 Maximize throughput 24 Minimize delay NOTE: Under normal conditions, only one type of service is set within a packet. Victims of a DDoS attack consist of both the end targeted system and all systems maliciously used and controlled by the hacker in the distributed attack.

This type of denial-of-service attack is perpetrated by hackers to target large-scale, far-reaching and popular websites in an effort to disable them, either temporarily or permanently. This is often done by bombarding the targeted server with information requests, which disables the main system and prevents it from operating. This leaves the site's users unable to access the targeted website. Attacker can choose different ways to take down victim systems or machines. There are several ways to attack and being hidden from the victim. Where real attacker will never exposed identity.

Further in the paper, we will describe the attack techniques and behavior. Those attacks are huge in volume and can be paralyze a running network. In DoS and DdoS attack, hacker or intruder tries to find out a vulnerability of a network and attack against the vulnerability.

The vulnerability can be an open port or any service. The attack depends on the purpose of the attacker. Distributed Denial of Service is a hot topic in a present world. Because it can hamper online applications like banking, trade and e-commerce etc. Many researchers are working on this issue, till before According to many researcher DDoS attacks victim can be several types.

According to some research paper, attack can be two types: i Semantic Attach and ii Bruite Force Attack. Semantic Attack initiates attack from a single PC or workstation. We will talk about more Attacking tools further in the research. Where defined rules will detect UDP Flooding attack according to rules. The alert will be captured in a log file for further investigation. Some of the paper has described some mitigation techniques, which was well-known and pre-built in industry.

Here, some of the techniques: 1. Disable unused services. Used of commercial or freeware security patches.

My IT projects : UDP Flooder in C

Use pool of IP for Servers. So, other legitimate queries will be unresolved or timeout. Some of them actually tested in real network like ISP Network. Because, may an attacker want to take down a whole network or want to take down a specific service from legitimate users. Bandwidth Attack or Volume Based Attack ii. Protocol Attacks iii. Application Layer Attack 2. In this scenario, attacker attack the network with huge amount of traffic and the victim will process that traffic and at a certain time, victim started to drop packets and at the other end sender sent more packets continuously.

After a certain time victim unable to accept legitimate traffic. On the other hand, the network bandwidth was consumed by the massive attack.

Where legitimate traffic was blocked due to massive amount of traffic. However, a UDP flood attack can be initiated by sending a large number of UDP packets to random ports on a remote host.

Thus, for a large number of UDP packets, the victimized system will be forced into sending many ICMP packets, eventually leading it to be unreachable by other clients. The attacker s may also spoof the IP address of the UDP packets, ensuring that the excessive ICMP return packets do not reach them, and anonym zing their network location s. In effect, drowning the victim with a flood of packets. Protocol attacks are usually measured in Packets per second. The client requests a connection by sending a SYN synchronize message to the server.

The client responds with an ACK, and the connection is established. This is called the TCP three-way handshake, and is the foundation for every connection established using the TCP protocol. The server will wait for the acknowledgement for some time, as simple network congestion could also be the cause of the missing ACK, but in an attack increasingly large numbers of half-open connections will bind resources on the server until no new connections can be made, resulting in a denial of service to legitimate traffic.

Some systems may also malfunction badly or even crash if other operating system functions are starved of resources in this way. In , attackers began to take advantage of that feature when they found that a packet broken down into fragments could add up to more than the allowed 65, bytes. Many operating systems didn't know what to do when they received an oversized packet, so they froze, crashed, or rebooted. The intent of these attacks is to crash the web server. The magnitude of this type of attack is measured in Requests per second. Teardrop Attack: In a Teardrop attack the target machine is attacked by sending mangled IP fragments with overlapping, over-sized payloads.

Portscan: Portscan involves an attack that sends client requests to a range of server port addresses on a host, with the goal of finding an active port and exploiting a known vulnerability of that service. A port sweep is a transport layer attack. Worm: A worm is a self-replicating malware computer program capable of sending copies of itself to other nodes in the network.

Worms almost always cause at least some harm to the network, even if only by consuming bandwidth, and can also harm up to system failure and can lead to system failures. Spam: Spam is most often considered to be electronic junk mail or junk newsgroup postings. 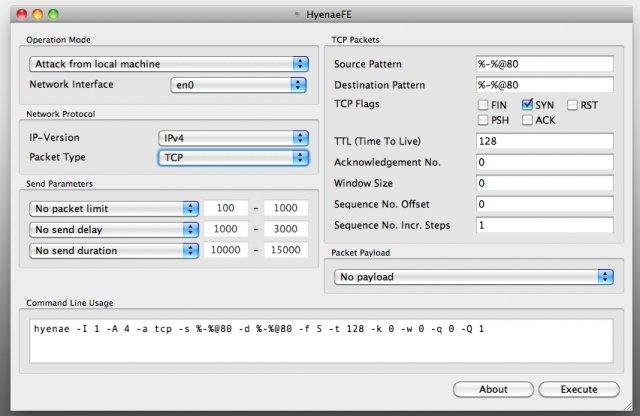 Some people define spam even more generally as any unsolicited email.